A court heard MV Holmglen was a ‘bad steering ship’ but couldn’t account for the little cargo carrier’s rapid foundering off Timaru in 1959. Will Harvie reports.

The sinking of Motor Vessel Holmglen on November 24, 1959 with all the loss of all hands has never been explained.

He gave his position, which was about 35 kilometres southeast of Timaru. Officials at Otago Harbour responded and he asked them to stand by for further messages.

But nothing more was heard.  All 15 men on board perished.

The accident shouldn’t have happened, an expert said.

“No ship is unsinkable, but this little one – less than five years old and fitted out for the worst that her planned role of supply ship to sub-Antarctic islands could throw at her – should not have foundered when she did,” wrote ​Gavin McLean wrote in his 1995 book, New Zealand Tragedies, Shipwrecks and Maritime Disasters.

Sometime afterwards, divers from the NZ Navy examined the ship on the sea floor with an underwater video camera. It was sitting upright and there was no evidence of an engine explosion, holes in the hull or collision with rocks.

A Court of Inquiry found the cargo appeared to be stowed properly and Holmglen was not overloaded. 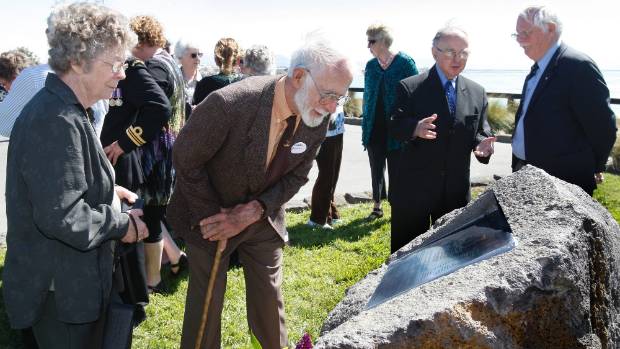 The Holmglen memorial was unveiled in 2010.

A strong southerly wind was blowing and the seas were moderate to rough, according to the editors of the 8th edition of New Zealand Shipwrecks: Over 200 years of Disasters at Sea (2007).

These conditions were “not so bad as to prevent smaller craft from responding to her distress signal”, the editors wrote.

But the Court of Inquiry also accepted evidence that Holmglen was a “bad steering ship”. A sail was sometimes used to “prevent her yawing and keep her steady on her course and to steady her from rolling”, according to Ingram’s book.

The court tried to imagine a scenario where those characteristics could have led the ship to sink.

The ship might have experienced “unusually higher than average seas” which might have “caused some damage to her”.

In that case, the heeling reported by Captain Regnaud could have been caused by water pouring through its doors and hatches. Or maybe the cargo – some of it on deck – shifted.

There are more mysteries. Sure MV Holmglen probably sank quickly, but why didn’t anybody survive? There is some evidence men got off before it sank.

The first rescue craft – two NZ navy survey launches – cleared Timaru harbour at 10.30am and reached the position reported by Captain Regnaud at 12.30am. 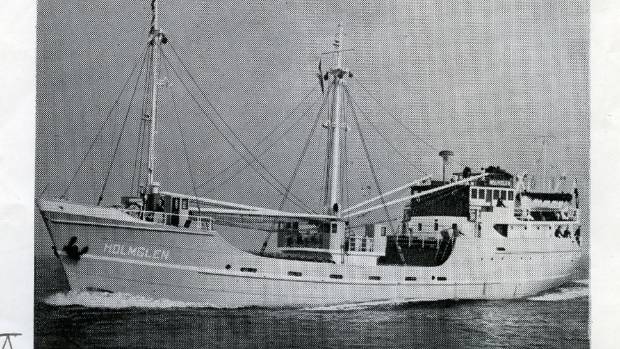 Another view of the Holmglen, taken in 1959.

They fired flares to attract the attention of survivors and at 1.50am crew aboard one sighted a green flare one to five miles distant,  apparently fired in response. It was immediately investigated but nothing was found.

Ingram reported 19 craft as well as aircraft searched for survivors that day. An oil slick was sighted and floating wreckage found.

Two bodies were recovered. One was tangled in lifebuoys, the other wearing a lifejacket. This suggested they had survived the sinking, although not conclusively.

Rising seas and worsening sea and wind conditions forced officials to abandon the search that afternoon.

Two days later, a vessel departing Timaru found a Holmglen lifeboat, overturned and empty, about 26 miles northeast of the port.

This discovery prompted a full scale air-sea search the next day, which turned up a third body about 4 miles southeast of the found lifeboat.

Interest in the Holmglen tragedy waned until 2008.

In February, the retrieved lifeboat was put up for sale on Trade Me after having hung in the Portside Bar & Grill in Wellington for about 20 years. It was bought by a Dutch school rowing club, which shipped it north and refurbished it. (The Holmglen and the lifeboat were built in Holland.)

It was given the new name Te Maru, a Maori name for Timaru, in recognition of the tragedy.

Te Maru has been used in rowing races. It also was used as a prop in a 2017 Dutch television mini series depicting a World War II incident in which Japanese aircraft sank a Dutch freighter carrying German civilian prisoners.

Then, in November 2008, Blenheim dive shop owner Kevin Bailey and two friends dived on the Holmglen wreck in water 65 metres deep. This was deep for scuba diving but the three retrieved the ship’s bell. Bailey suffered a heart attack as he resurfaced, a corner ruled, and could not be saved.

In 2010, Timaru identities and the South Canterbury Historical Society erected a Holmglen memorial at Patiti Point, overlooking the seas where the ship foundered. It pays tribute to the 15 sailors and the many vessels that took part in the search for survivors.

Judith Regnaud, daughter of the captain, made the trip down from Tauranga to attend the event. “It’s wonderful. It means closure for a lot of people,” she said. “We didn’t have a memorial for Dad, so this is it, after all these years.”